Our research shows that house building is failing to keep pace with population growth in Britain’s fastest growing towns and cities. Our analysis of official data for UK house building and population growth shows Belfast is the UK’s fastest growing city. The Northern Irish capital’s population increased by 21%, or 59,989, from 280,211 in 2011 to 340,200 in 2017. Over the same period however just 4,220 new houses were completed in the city equating to one new home for every 14 new inhabitants.

Coventry is the UK’s second fastest growing city. Its population increased by 13.6% between 2011 and 2017 from 316,900 to 360,100, an increase of 43,200 people. But house building in the city has lagged behind with just 5,460 new properties completed over the same period equating to one new home for every eight new inhabitants. The city has seen house prices increase by 44% over the same six years.

Meanwhile, although the population of Birmingham has only increased by 64,200, or 6%, between 2011 and 2017, house building has entirely failed to keep pace with only 5,650 homes completed in the same six years equal to one property per 11 new residents. House prices in the UK’s second largest city have risen by 34% in the same period.

Surprisingly, the population of London was the 11th fastest growing in the UK, seeing an increase of 651,000 between 2011 and 2017 taking the total population of the capital from 8.1m to 8.8m, a rise of 8%. But there were also 146,000 housing completions over the period equal to one house per 4 new residents. Despite this property values in the capital still increased by 66%.

The town which saw the largest increase in property values was Slough, where house prices increased by 68% between 2011 and 2017. Over the same period just 1,920 new properties were built while the population increased by 8,600, giving a ratio of one new home per 4 new residents.

We analysed the population growth and house building statistics of 100 towns and cities across the UK, using Office for National Statistics and official government housing data. We believe the figures paint a stark picture of the parlous state of the UK’s property market and the lack of house building in the UK overall, eight months after Prime Minister Theresa May called the lack of housing in the UK as the biggest domestic policy challenge of our generation in her Conservative Party Conference speech [1]. Current estimates suggest the UK as a whole need to build 300,000 new homes each year in order to combat the housing crisis [2]. 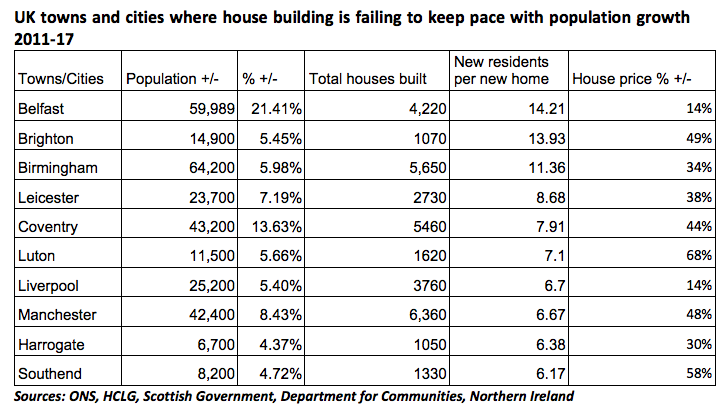 Of the towns and cities that we studied, two saw their populations decline. Scarborough’s population fell by 300 people between 2011 and 2017 but the town built 1980 homes over the same period while Blackpool’s population declined by 2,100, or 1.5%. Finally, the greatest anomaly thrown up by the study found that house prices in Cambridge increased by an extraordinary 62% despite the city’s population increasing by less than 1%. Over the six years analysed Cambridge built 4,420 equivalent to just over four homes per new resident.

ONS data estimates there are on average 2.4 people per household in the UK. On this basis, of the 100 towns and cities that we analysed, less than half were building enough homes to keep pace with population growth.

Based on this analysis, we believe there is clearly a need for greater house building in Belfast, Manchester, Coventry and Birmingham for instance, but perhaps less so in cities like Glasgow, Swansea or Sunderland. Given how much is made of property values in London and the link between high house prices and a lack of property, it is perhaps surprising that the data suggests there is less of a chronic under-supply of housing than would be believed.

If you have a project that you’d like to discuss with us, get in touch! Call us on 020 3409 3300, drop us an email on enquiries@blendnetwork.com or just come and grab a coffee at our office in London’s Mayfair. We are here to listen and help you with your project.

Your capital is at risk. If you lend to business. P2P lending is not covered by the Financial Services Compensation Scheme. Learn more
BLEND Loan Network Limited is authorised and regulated by the Financial Conduct Authority (Reg No 769197). BLEND Loan Network Limited is registered in England and Wales. Registered office: 58 Queen Anne Street, London, W1G 8HW.