Data from the Nationwide House Price Index shows that UK house price growth was gaining strong momentum before the pandemic struck in March, and that the growth carried out into April despite the scale of the full lockdown. Indeed, UK house prices continued their ascent and climbed by 3.7% year-on-year in April, up from 3.0% year-on-year in March. This was the strongest annual growth in over three years (see chart of the month), although it’s important to note that the impact of the pandemic is not fully captured in these figures (see below). The cumulative growth during the first four months of this year to 2.7% compared to last year.

However, monthly data shows that in April, UK house prices grew slightly less than they did in March: 0.7% month-on-month in April compared to 0.8% in March. 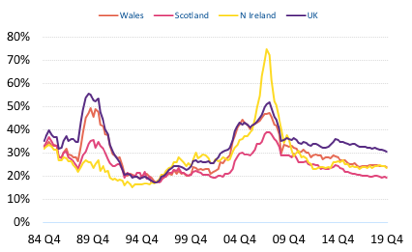 Our underwriting team at Blend Network remain very busy assessing deals to ensure we continue lending to experienced property developers who come to us with a solid project, an enviable track record and a strong exit strategy. We know you are hungry for more deals. A recent article in last week’s The Economist titled ‘A dangerous gap’[1] summed up the recent market sentiment whereby equity markets have got out of whack with the real economy and investors are concerned that market will at some point see a correction. Therefore, many investors we speak to are looking for other places to invest outside the equity market and see fixed-return property-secured loans as an attractive option. So, keep an eye for new loans coming at www.blendnetwork.com.

[1] The Economist, A dangerous Gap